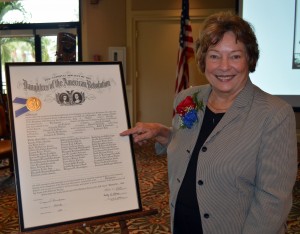 “Our historic Big Cypress Chapter NSDAR had amazing beginnings in 1967 – 1969!  This was a time of limited roads and transportation in South Florida. There were no computers or cell phones.  Actually snail mail, telephone land lines, and just getting together for lunch was the best way of communicating. Most Naples residents left in April for summer homes in the Northeast.  It was surprising when South Florida officials announced plans to construct a new highway I-75, which would become known as Alligator Alley, from Naples to Miami!

With this new expansion and easy access to drive from coast to coast, Sadie Butts, regent of Biscayne Chapter in Miami, Florida, had goals and dreams for expansion too.  She asked her daughter, Joy Butts Carter, a member of the Collier County School Board, to help start a DAR chapter in Naples.  Mrs. Carter had dedicated help from Margaret T. Scott, Ruth Straley, Marian LoPresti, Jane Grunwell and others equally devoted to this worthy endeavor.  Our new West Coast of Florida chapter would be named Big Cypress Chapter in honor of the geographic land features connecting Miami to Naples via the Everglades and Big Cypress National Preserve.”

At one time, Florida had a million acres of cypress trees.  Today, in spite of the developer’s axe, Collier County, Florida boasts the largest remaining stand of virgin bald cypress in the country.  These beautiful trees protect the homes of the Miccosukee and Seminole Native Americans, as well as providing habitat for the endangered Florida panther.